The Wise Guys are an a cappella group from the early 1990s, originally from Cologne, Germany. If you are an American, you might have heard their hit single, “Jetzt ist Sommer” (Now It’s Summer).

As a Christmas gift, my German brother-in-law bought us tickets to see the Wise Guys in Göttingen for their Antidepressivum Tour 2013. (Here’s the official promo video. It’s actually pretty cool):

So we went to Göttingen and saw the show, and now that I’ve been to a Wise Guys concert, I would like to make a few remarks about the experience:

After the show, The Wife and I walked to Bahnhof Göttingen and waited for the train to take us back to Hannover. I thought it would be a brilliant idea if we had beer for the ride home, so we went inside the nearest Burger King for a couple pints. (Oh yes, you can order beer just about anywhere in this beautiful country.) And as my wife was ordering from the woman behind the cash register, I reached over her shoulder in a sudden, stroke-like jerk of impulse, pointed to the big sign overhead and yelled, “–And that! We’ll take that giant bastard too.”

I don’t know what came over me. I hadn’t eaten fast food in over a year and a half, so I must have been overwhelmed by that gigantic golden burger looming above me like the glory of the Sun. And in that picture above, my wife is holding only the remaining half of the burger. It was bigger than her head, and so greasy and wonderful it absolutely destroyed our digestive tracts. We were both rippin’ ass the whole way home, and I’m not just talking about innocent little toots here and there; we were dropping bombs on that train. So noxious they burned our little pink balloon knots.

Would you like to experience another (fascinating) German event with us? Check out our video from the 2013 Hannover Oktoberfest. 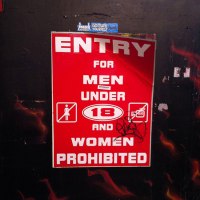