Winters in Germany last a long time, and by long, I mean like half the year. They are cold, windy and darker than your worst nightmare. As a result, there are lots of fun social traditions during the winter months to keep people happy and less inclined to go down on the business end of a shotgun. In Niedersachsen, as I’ve recently learned, there is an old tradition known as ‘Grünkohlwanderung;’ large groups of people taking long walks through snow-covered forests with frequent stops to take shots of liquor and play extraordinarily humiliating games. At the end of the walk, everyone gathers in a restaurant to eat green cabbage (kale) and fatty sausage, hence the name Grünkohlwanderung, AKA:”Green Cabbage Walk.”

Recently, one of our German friends had a birthday. To help celebrate, we joined 20 other people and went on a Grünkohlwanderung through the Eilenriede forest in Hannover, Germany. We knew we were in good company because there were two wooden wagons chock-full of beer, liquor and party favors. To start things off, all the men had to stand to one side, dangle a tea bag from their teeth and swing it to see who could toss theirs the farthest. I thought I was pretty clever dousing my tea bag with beer on the sly beforehand — you know, to give it more weight — but it landed like 2 yards in front of my feet anyway. That earned a few laughs and absolutely no respect from the Germans, so I spiked my beer and pounded it with great haste.

We walked and talked, and everyone had a great time. I even got to meet a couple who brought their baby along with them. My favorite part of that particular conversation was when the mom readjusted the baby’s blankets and — without missing a beat — freed-up one hand by sliding her beer in the milk bottle-holder of the stroller. The gesture was so fluid it was like watching poetry in motion.

Thank Christ I didn’t have to participate in the next game we played: the birthday girl made two teams compete against each other in a whistling competition — while chewing on mouthfuls of dry white bread — and the rest of us had to guess the songs they were attempting to whistle. You should have seen the bread crumbs fly. It was spectacular. I have no idea which songs they were whistling, because most of them were traditional German drinking ditties, but I definitely heard some Lady Gaga in there.

We kept walking and drinking until I discovered one of the people in our group was a medical student. I went to great lengths to convince him Germans are taller on average than Americans. I even tried to get scientific about it:

ME: “Look! Look at those two handsome bastards in front of us. They’re like 7 feet tall!”

DOCTOR: “Those are my cousins. They are exceptionally tall.”

ME: “I know so. I think it has to do with the climate. You guys need more surface area to absorb sunlight because the weather in Germany sucks.”

DOCTOR: *Laughing* “It probably has to do with diet…”

*A squeaky voice chimed in behind me, and I turned around to see the shortest German woman in the entire world.*

SUPER SHORT GIRL: “Not everyone in Germany is tall. Look at me.”

ME: “Nobody asked you, Short Round!“

Finally, we arrived at the restaurant, and I gotta tell you: kale, sausage and skinned potatoes may look like hell, but after a long, cold walk and copious amounts of alcohol, they taste amazing. 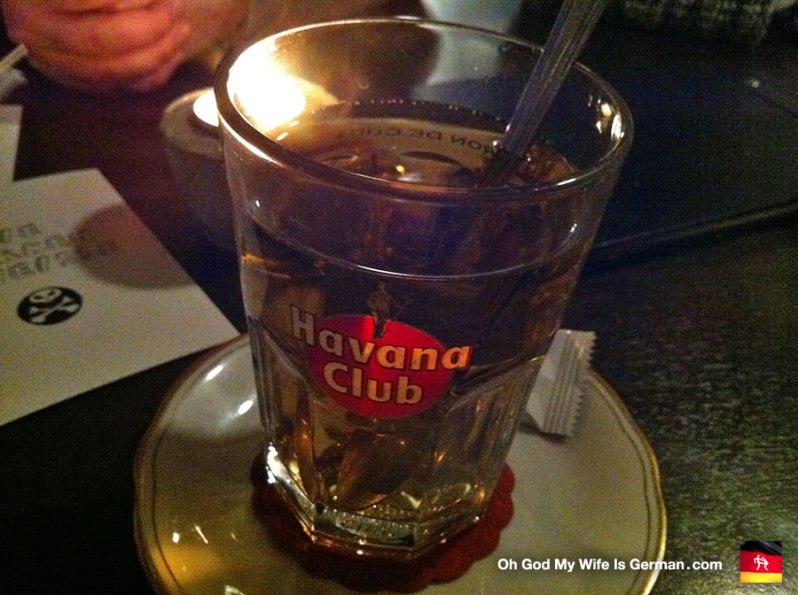 Check it out! That’s real German grog right there! The drink of vikings! (Somehow, I always imagined grog would be a mixture of moonshine and beer, but apparently it’s just hot water, whiskey and lemon juice. Whatever. I still felt like a berserker when I ordered it.)

That’s my wife fixing up a couple of plates for us. I will never understand why Germans don’t like to eat potatoes with the skins on. That’s where all the vitamins are! (Or so my mother always taught me.) 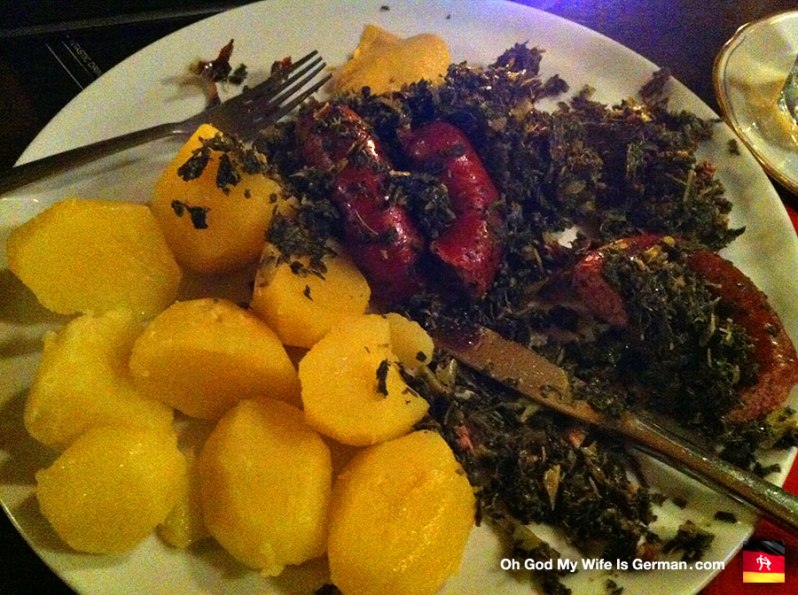 And there you have it — the Grünkohl meal. I have seriously desired this food every night since I first had it, but if I ate it all the time, I would be typing this blog post from a hospital bed with clogged arteries and a pacemaker in my chest. “Nurse! My bedpan is full! Also, this hospital grog tastes like steaming pee pee.” 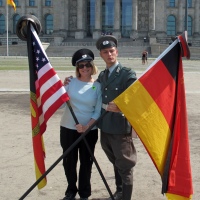