At the beginning of November, my wife and I took the train from Hannover to Bremen, Germany. It was just a day trip, and I honestly wasn’t expecting much. The things I knew about Bremen could be counted on a high school shop teacher’s hand (because they’re always shy a couple digits):

That’s it! Nothing else! So you can imagine my surprise when I discovered Bremen absolutely rules. Here’s why…

Unlike Hamburg or Berlin, the Allied Powers didn’t bomb the everloving shit out of Bremen during World War II. (And by this, I mean they did mess it up real good, but they didn’t flatten it completely.) The result is a massive medieval market square still intact today! There’s a beautiful town hall and an enormous cathedral, and you can hardly take a step without bumping into one famous sculpture or another. (Like the Bremen Town Musicians, named after the Brothers Grimm folktale involving a donkey, dog, cat and rooster, who stand on each others backs in order to scare the holy piss out of a bunch of felons during a home invasion.)

The very oldest part of Bremen is called the Schnoorviertel, and it’s the neighborhood where all the medieval sailors and merchants used to live. I swear to Christ, I felt like I’d stumbled into Diagon Alley from the Harry Potter series. Of course, instead of Ollivanders, the Leaky Cauldron and Gringotts Wizarding Bank, the Schnoorviertel of medieval times was probably more like a river of human waste and merkin-sporting prostitutes dying of The Consumption.

Much like OMSI in Portland, Oregon, Bremen has a kick-ass science museum called the Universum. My wife and I were there for its Universum bei Nacht event, where adults can enjoy the permanent exhibit with live music in their ears, cold brew-doggies in their hands and absolutely no screaming kids biting at their ankles. We also got to place little stickers on our favorite exhibit pieces, effectively voting for which ones would remain, and which would be replaced. My favorite was the shadow room, which featured a phosphorescent wall and a flashbulb. You hold a funny position against the wall until the flash goes off, then step back and laugh at your perfectly captured silhouette. (You can imagine how quickly this innocent little bit of scientific education descended into a porno horror show.)

I can’t really do justice to the awesomeness that is Bremen, so I’ve put this little video together to summarize our trip. It’s only 95 seconds long, and it features videos my wife recorded herself! Check it out:

And as always, here’s the complete picture gallery with snarky captions. Please click one of the images below to begin the slideshow:

There’s the Bremen Hauptbahnhof. Luckily, the Metronome train conductors weren’t on strike, unlike the Deutsche Bahn. (Seriously, DB, get your shit together.)

Here’s the requisite train station sign I post from every new city we visit. I think I take these pictures to prove I was really there. As if, somehow, the rest of these pictures fail to do so…

There’s the famous mural inside the train station. My wife tried to explain all of the details to me, but I was too busy trying to open my beer can.

Here we have the Bremen Hauptbahnhof from the outside, and once again, I broke my own cardinal rule of photography: never shoot into an oncoming crowd of people; blurring all the faces is tedious and motivated only by my fear of legal repercussion.

You knew this one was coming — Beck’s tall boys in Bremen. “Zum Wohl!” 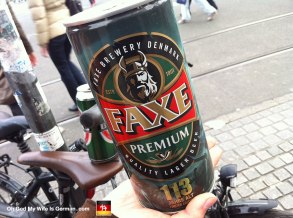 Now THIS is a 1-liter can of beer from Denmark, called Faxe. This stuff will shoot your testosterone levels straight up to Valhalla.

Look at that sexy valkyrie on the side of the Faxe can. First time I ever cracked a brew-dogg in public while sporting chub.

At this point, I was beginning to wonder if it was actually Bremen working its charm on me, or this gigantic can of sex-water. 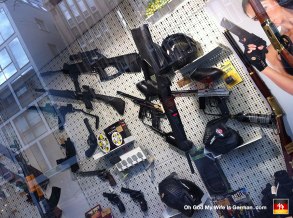 First shop we saw? Gun store. Well, an Airsoft and paintball store, but still. They sold knives and brass knuckles too. 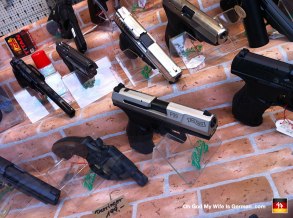 “Welcome to the Free Hanseatic City of Bremen! Here’s your complimentary pistol…” 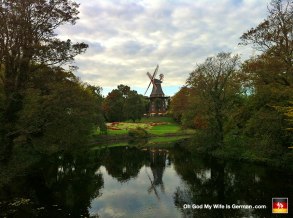 Look at that windmill. I could have stared at it all day long, if not for the surprisingly strong Muslim women in pink hijabs who shouldered me out of their way to take pictures. “Well, As-salamu alaykum to you too!”

It was very hard to snap a picture of these pigs without a stinky little kid in it. And yet, look at those feet at the top; it looks like a kid being carried away in the pig’s mouth.

Another shot of the bronze piggies. I have no idea what they signify.

Here are some creepy cherubs around a fountain. At least they’re not peeing in the water…

There’s the town hall. I couldn’t get a shot without power lines. My wife said they made my pictures, “unique.”

We just happened to show up on the last day of the Bremen Freimarkt. Odd mix of medieval buildings and fatty foods.

Check it out. History and goofy tradition in one. 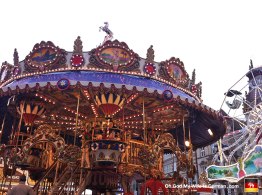 Double-decker carousel! I really wanted to ride it, but I figured my screams of delight would frighten the children.

Them sharp-ass titties belong to the Cathedral of St. Peter, or so the internet tells me. 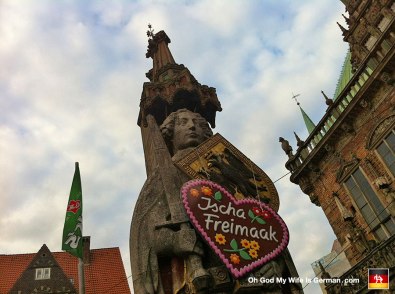 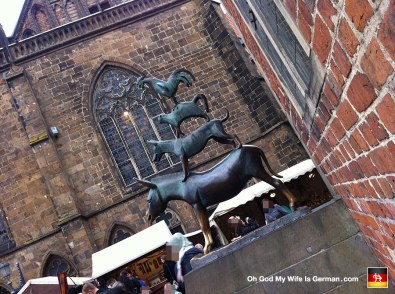 The Bremen Town Musicians! (I cannot tell you how long I had to wait to get a shot without some stupid tourist’s gigantic head in it.)

In one of the booths they were smoking fish. I don’t know. That fire looks more like it’s gonna accomplish more BURNING than smoking. 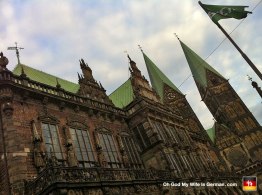 There’s the town hall and the cathedral. (I thought this shot was very “artsy,” but now I see it just sucks.

Here’s a close-up of the church. Can’t you just see the godliness? Me neither. It just looks dirty.

This proud fellow is called Bismarck Reiterstandbild. He sounds important, and yet… I find myself not caring in the slightest. 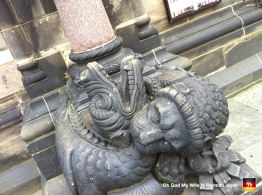 There’s the Freimarkt from the other side. Once again, I find myself blurring dozens of faces…

And here we have the saddest gargoyle in the world. I named him, “Frumples.”

I believe this dude is a friar or something. The courtyard behind him belonged to the cathedral’s convent or monastery or something — a place where people aren’t supposed to bump uglies — that’s the part I remember.

We’ve already discussed Madonna’s pointy bra with this one, so it’s time to get Express Yourself stuck in your head for the rest of the day.

This sign was at the entrance to the Schnoor. As a graphic designer, I LOVE that key symbol. I think I need to get it tattooed betwixt my butt cheeks.

And there’s the Schnoorviertel itself! Look how narrow the streets are. I just love the half-timbered houses and overall sensation of claustrophobia.

Aaaaaand there’s the most disturbing sculpture ever.

Wait, what’s with all the super weird artistic wares here in the Schnoor? 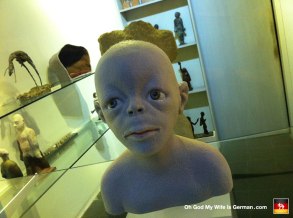 Okay, that does it. Golem here is obviously warning me to get out of this town toot sweet.

And yet, this place is just so cute! Look at that tree, all standing there like it owns the place…

“Oh don’t mind me. I’m just a doorway to nowhere at all.” 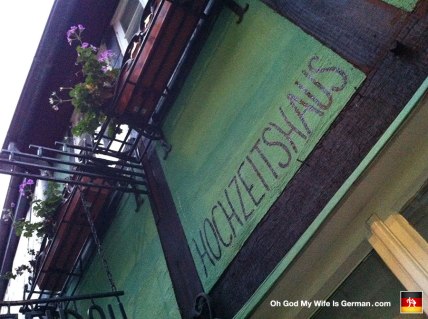 My wife told me newlywed couples can rent this entire building for just themselves, making it the most expensive honeymoon suite on earth.

I can’t remember the name of this cafe, but the tomato soup was out of this world!

Here we are back at the Freimarkt. Those lights and silhouettes remind me of Close Encounters of the Third Kind. 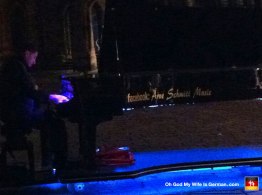 This is Arne Schmitt, the piano player, apparently (http://arne-schmitt.com/), and he’s on Facebook. He was playing some Elton John tunes right in front of the cathedral… you know, the way God intended. 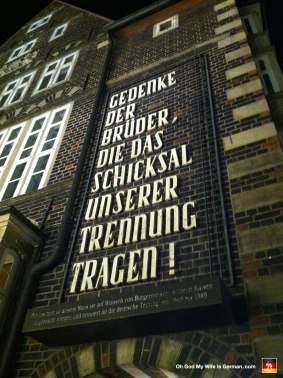 I guess that says, “Remember the brothers who hold the fate of our separation.” My wife told me what this quote was all about, but I forgot.

I have GOT to find that skeleton suit in man-size. I love it! (But why is the kid behind him deep-throating that microphone?) 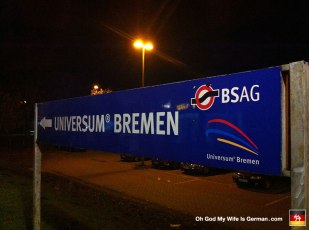 Here’s the sign pointing us toward the science museum! Gettin’ excited all over again!

Now here’s a terrible photo of the main building of the museum. In daylight, it looks like a zeppelin.

…or a blimp. Or a submarine. Or a spaceship…

Live music and a DJ! This science museum has it all!

Here’s some kind of gear exhibit. I think it rolled a penny around or something. 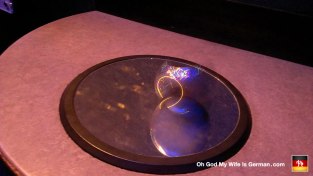 This was a magnetic disk that would spin faster and faster, louder and louder, making you strangely nervous until it stopped. NOT my favorite piece. 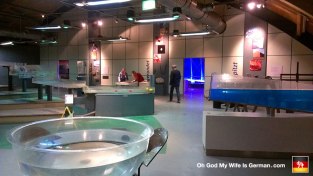 There’s the wave maker and a bunch of other water-oriented exhibits. (We made sure to get water ALL over the floor.)

And there’s the inside of the main Universum building. Isn’t that just the coolest thing?!

Thank you for reading our blog and have a wonderful day!